Some scenes of Suicide Squad filmed in Costa Rica

You are here:
BlogNews

Sueño Azul Hotel was in some of the scenes of the movie.

This was confirmed by the local producer Sergio Miranda, who gave exclusive details of the filming of the movie.

The scenes were filmed in our country are the ones from Cara Delevingne, who plays the character of Enchantress June Moone, on the film. 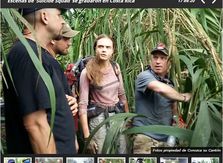 In October 2015, the actress came to the country, but at the time was unknown that would shoot on locations like Sarapiqui and Pococí.

Miranda, who served as the producer of the movie area, revealed that there was a total of three filmed scenes in the country. All of them appear at the beginning of the film, When Character Presentation of June Moone is done, the archeologist acts as Delevingne before becoming the Enchantress

“The first one is a cell, where there is a participation of two Costa Ricans who interpret Two security guards.”

“The second scene is the moment when June Moone finds a cave. Where she will become the bad girl Enchantress”, adding that both were scenes recorded at Hacienda Sueño Azul, in Horquetas de Sarapiqui.

The third one is a view of the forest, Recorded on private property on Route 32 that takes to the Caribbean slope.

According to Miranda, he revealed that in Suicide Squad filming in Costa Rica, 40 Costa Ricans participated, including national Eric Víquez, as art director.

On a 600 hectares’ area, recordings were made for four days and actress Cara Delevingne stayed at the hotel Sueño Azul.

“A week before recording a national technical built a wall to simulate a place of confinement of persons with mental problems. There, the interrogation scene was recorded and they also built a kind of totem. The two structures remain in the hotel”

Despite criticism, Suicide Squad won during his first weekend in US theaters. The new DC Comics film generated $135 million in the United States and Canada, more than that obtained by Deadpool and Guardians of the Galaxy during their respective debuts.

However, not everything went so well for the suicide squad. Fans filled theaters on Thursday and Friday, but on Saturday were not so many. That could anticipate low visitation in the coming weeks for the film, which had a cost of $175 million.