Some of the most common animals to see in Costa Rica! 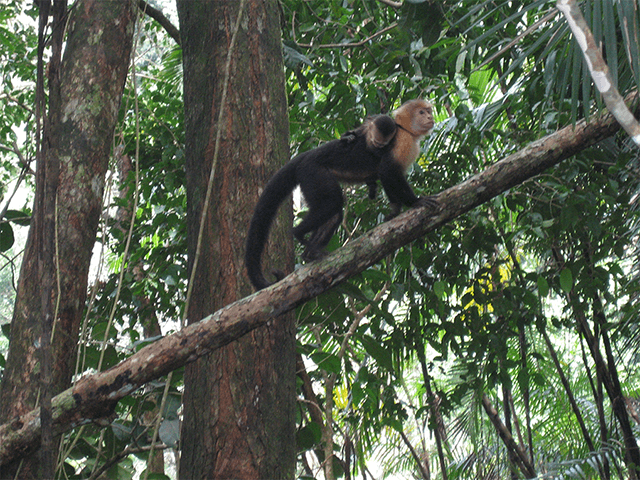 Yellow Mantled Howler Monkey: This female was taken in Monteverde, under one of the hanging bridges. They live in groups of 8-12 members. One alpha male, two or three beta males, and the rest are mostly females and juveniles. They mainly eat tender leaves and move through the rainforest.

White-Faced Capuccin Monkey: This male was taken in Manuel Antonio, on the third beach.  The Capuccins are omnivorous (They eat everything) and they go after the tourists that leave crackers or candy in their bags or purses. They can be aggressive and move in groups of 15 to 20 members.

Three Toed Sloth: This male was taken in Sarapiqui, by the road. The three toed sloths live up on the threes and have a type of digestion that is called bacterial digestion (Like cattle). Their metabolism is very slow and that’s what makes them as slow as they are.

White Faced Coatimundi: Family of the racoons, they are arboreal rodents. They eat fruit, nuts and leaves. The females and infantiles live in big groups that travel through the rainforest. Males get into the groups during the mating season. Usually though, males are by themselves.

Crab Eating Racoons: These three were taken on the third beach in Manuel Antonio. The crab-eating raccoon eats crab, lobster, and other crustaceans, but is an omnivore and its diet also includes, for example, smallamphibians, turtle eggs, and fruits. It resembles its northern cousin, the common raccoon, in having a bushy ringed tail and “bandit mask” of fur around its eyes.

Rainforest Romance Package… our thoughts on it!
November 19, 2014