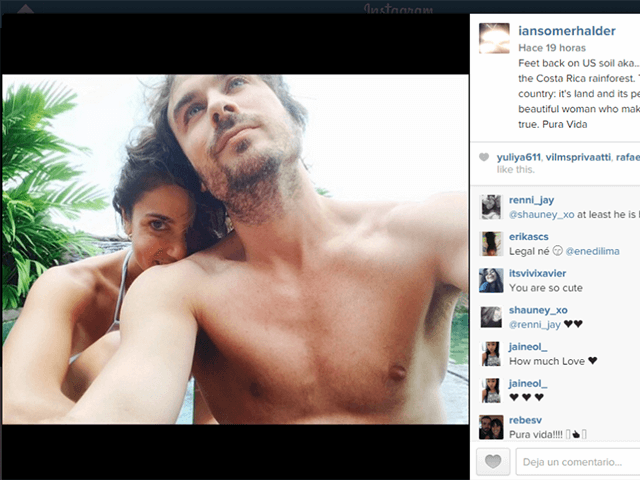 More Hollywood celebrities are choosing Costa Rica as one of their preferred hideaways. One of the most recent instances of this trend was shared on the Instagram online social network by actor Ian Somerhalder, who is better known for his starring roles in popular television series Lost and The Vampire Diaries.

On March 13th, Mr. Somerhalder shared an Instagram selfie, in which he appears shirtless and next to his dazzling wife Nikki Reed. Ms. Reed is an actress from Southern California who is known for her work in edgy films such as Thirteen, Lords of Dogtown, Cherry Crush, and the Twilight saga. Interestingly, both Mr. Somerhalder and Ms. Reed have played vampire roles in their respective acting careers.

Mr. Somerhalder included the following message along with the aforementioned selfie:

According to entertainment gossip website Just Jared Jr., Ms. Somerhalder and Ms. Reed chose Costa Rica as their honeymoon destination, which is not surprising since this particular tourism segment has been rapidly expanding over the last few years.

In the past, Mr. Somerhalder has mentioned his admiration of Costa Rica’s work towards nature conservation. To this effect, the Ian Somerhalder Foundation is dedicated to educating people on the importance of protecting the environment and animals. He also supports an organization dedicated to preventing suicide among LGBT youth. Mr. Somerhalder´s lovely wife is known as an animal rights advocate who volunteers at animal shelters.