A guide to the taxis in Costa Rica

A guide to the taxis in Costa Rica: One of the most concerning issues when traveling and in some countries especially is to know which taxis are safe, and which aren´t, if they are more expensive than others, if the fare is fair or not. In Costa Rica, of course, there is a great array of choices, and in general terms, it is pretty easy to see who is who. Please read the article if you are planning to come to Costa Rica.

Mostly all visitants in Costa Rica, sooner or later have to take a taxi… And yes! When you are a passenger of 2Costa Rica, you will be with private transportation among destinations, tours and so on. But if you decide to experience dinner in the nearby town… Or if you choose to stay in town for an ice cream after seeing dolphins and whales?

In Costa Rica, it is said, usually, “Take only the ones that have a yellow triangle on the door“. And,  easy to say… However, once on site, you will have other choices before you… And you may want to know who is who here.

Let’s talk here about the first ones you see when you come out in the airport:

You know about them before the exit, you will see these guys in white short sleeved shirts and brown tie. They are the only ones authorized to be at the airport and pick and drop passengers at the terminal. Wait a minute! Does that mean that 2CostaRica uses these? What about tour companies and hotel?

Well yes! They are them are authorized for just for short whiles. And private cars, have to park and get their relatives.

If you are one of our passengers most likely our staff will be at the airport with a board and your name on it, take your luggage and guide you to your transportation and hotel while the guide or driver explains to you everything about your Costa Rica vacation. But if for any reason your transfer in is NOT included, then, most likely you are to take one of the Orange Airport Taxis. 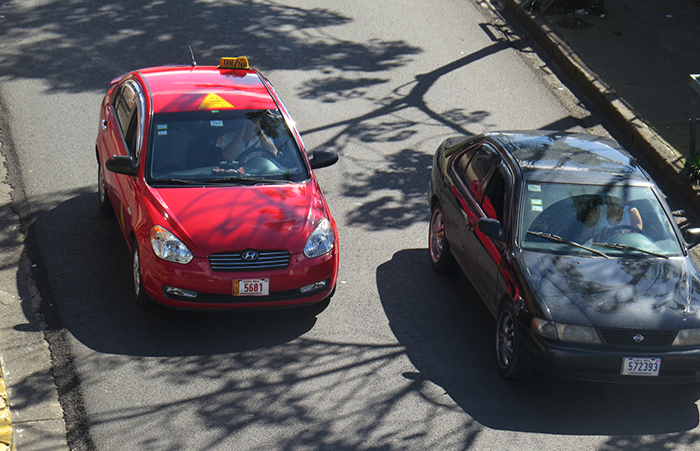 Wherever you go, you will see them. There are thousands of them. You will find them usually aligned near bus stations, plazas, supermarkets and hospitals. In the cities, they are regular cars. In the country towns, you will see that they are four wheel drives.

They are regulated by the government, and they are supposed to have meters that have to be used by law. They cannot tell you a random price, either negotiate it. They are the ones that have the yellow triangles on the doors and roofs (With their license number on them). 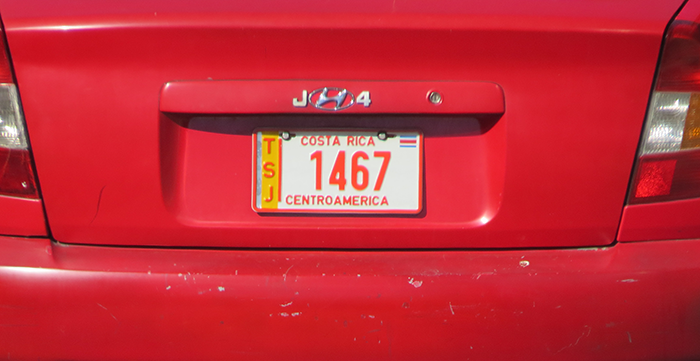 Plate numbers are red. And depending which province they are from the letters of the plate will change (In this picture TSJ means Taxi San José)

Their license plates numbers are red. That is the one distinction that you have to look for.

Read also: Things to know about visiting and driving in Costa Rica in the High Season

In San Jose and some areas of Guanacaste you can download an app called “Easy Taxi” to signal participating taxis that a client is waiting in that or this place. You get and estimated wait time and can track the taxi until it gets to you.

These are the taxis, that, most likely you will get if your hotel reception calls one for you. Simply make sure that they will use the meter.

This is the best way to go, as the hotel knows them and if you leave something in the car or something goes off… like no meter, for instance. You can have the number taken and talk to the hotel and even report it to the authorities.

You can also distinguish the ones that take credit cards by the signs on their roofs. (Just be very careful with the amount you are signing. They will charge it in Costa Rican colones) 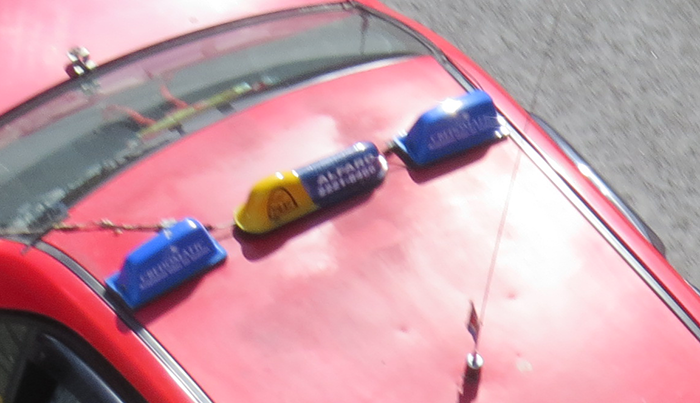 In some country areas, you will find the “colectivos.” They are the official taxis, but as they are driving they will pick other people on the way to the destination. Make sure you tell them that it is a private service. (This happens regularly in the Southern area.
Tips are highly appreciated, but not compulsory.

These cars have been quite polemic as they do have permits but they drive people at a negotiated rate (Some destinations have already fixed rates). They are specially set for some neighborhoods where red taxis may not want to get in for various reasons: Maybe their criminality rate or even because the streets are in bad conditions. They usually have a yellow circle on their doors.

These are simply drivers that will charge you whatever they feel like and they can be dangerous,  even some are known to have assaulted their clients. You may find them before malls and some other places where the regular red taxis are scarce.
A “pirate” might also be your tour guide’s neighbor who’s super recommended and might be the one taking you around whenever you want to go for dinner or such.
If a “pirate” gets caught, he/she might get a high fine or even their plates removal. So, they usually ask you to sit in front and if something happens to say that you know him/her.
Us, at 2Costa Rica, we DO NOT recommend these whatsoever!

And then, the controversial Uber.

They are mainly in the Central Valley, although are spreading throughout the country. You can also download their app and have them come to your hotel.

However, we do not recommend them as they are on the verge of illegality right now.

If you have any doubts, however, please call our 24/7 service or your travel consultant and they will gladly help you!